Home > About Us > Blog > Dreaming Of A White Christmas? Here’s How Likely It’s Looking

Dreaming of a White Christmas? Here’s How Likely It’s Looking 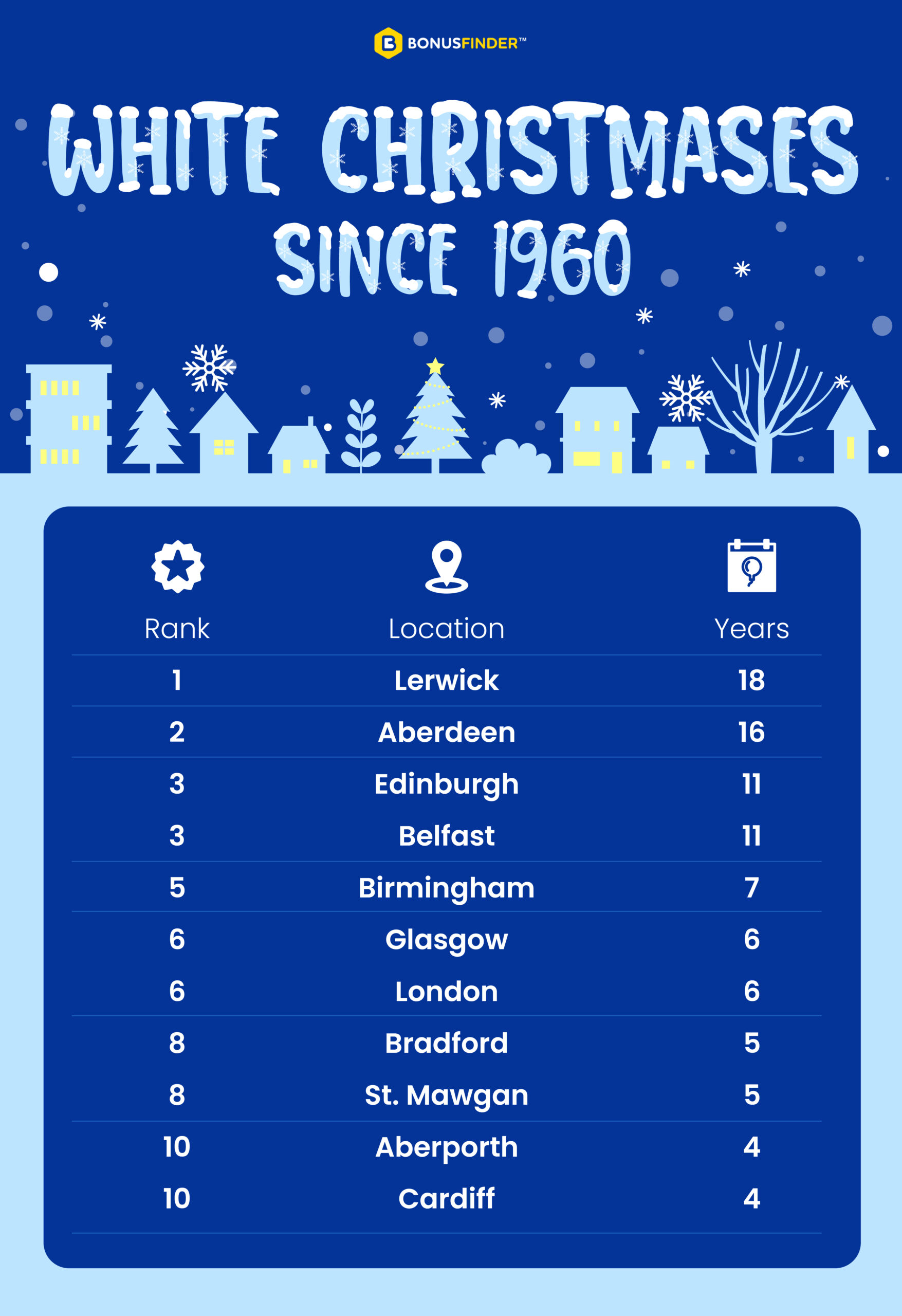 Dreaming of a White Christmas? Here’s how likely it’s looking

In recent years, it has seemed more likely that we’ll get a White Easter than a White Christmas in the UK, but this hasn’t always been the case. Whether you love to get involved in a good old community snowball fight, or just want to know whether to prepare the de-icer for your car’s windshield, it’s always helpful to know what the chances are of getting snow over Christmas.

We scoured the Met Office, the BBC, and various local news stations to find out which British locations have had the most success in wishing for a White Christmas, and which have had the least.

Which Areas of the UK Get the Most Snow?

Across the UK, we found that the golden years for White Christmases was between 1988 and 2001. While most areas saw some snowfall over this time, there are some locations in the UK that can expect snow over the festive period most years, and others that will be left gazing longingly out of the window.

Eastern Scotland isn’t far behind, having had 28 snowy years since 1960 and quite a few of those consecutively. You’re pretty much guaranteed a White Christmas every two years in Eastern Scotland, so you could always journey there for a festive staycation if you’re missing the snow elsewhere.

Western Scotland, the Northeast and East of England, and the Midlands follow up the winners. They’ve had 26, 23, and 21 white Christmases since 1960 respectively.

Lerwick, the capital of the Shetland Islands, had the highest number of White Christmases out of all towns and cities in the UK, with 18 in total since 1960. Aberdeen was the runner up with 12, but they’ve also had the most consecutive years of snow. Edinburgh and Belfast both had 11, which is surprising for the Northern Irish capital given that the country had the third greatest number of years without snow at Christmas, missing out 41 years out of 60.

Which Areas of the UK Have Had the Least Snow?

The two cities that had the most years without snow were Cardiff and Aberporth in Wales, which both had 56 years without snow at Christmas. St Mawgan in Cornwall, Bradford in West Yorkshire, and London also spent over 20 years waiting for the snow to fall. The last time London saw a White Christmas was last century, in 1999. Will it be their time again soon?

We have already seen snow so far this winter, with Storm Arwen shaking up the north and snow falling even in parts of the south. As we’ve seen, this hasn’t been a common occurrence for cities near the capital. It may be a sign that a White Christmas is on the cards for more of us this year!