Home > About Us > Blog > Who Will Be Christmas Number 1 This Year?

Who Will Be Christmas Number 1 This Year? 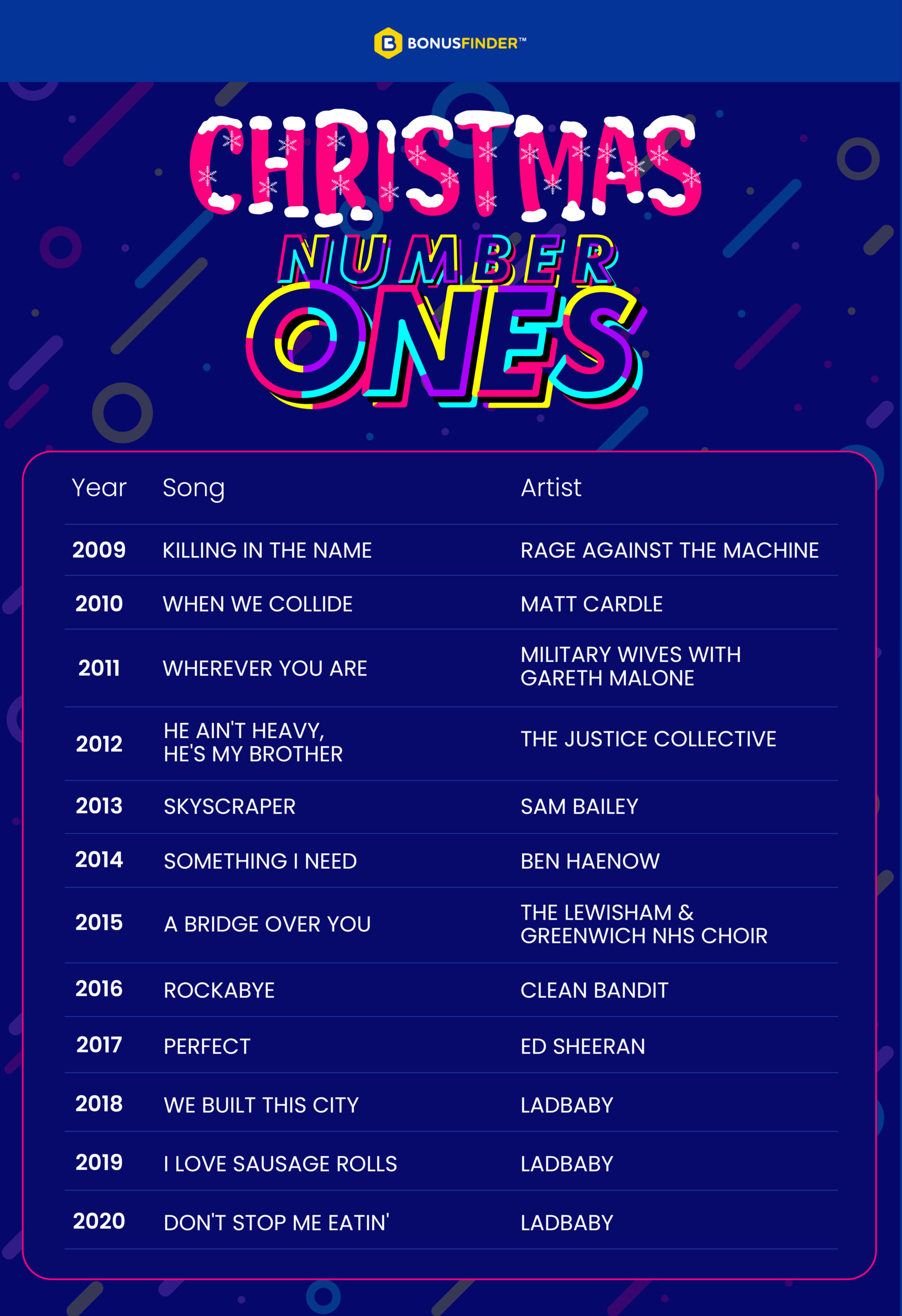 The UK Christmas number one is a prestigious title in our country, and contenders don’t go down without a fight. Throughout the years we’ve seen many Christmas albums, X Factor winners, and charity singles grace the top spot.

After collating a list of the UK Christmas number ones since 1952, we look at the past ten winners below.

2011: Wherever You Are, Military Wives with Gareth Malone

Wherever You Are was recorded by the choir that starred in Gareth Malone’s television show The Choir: Military Wives. Their song was dedicated to their partners in the military. Christmas is often a time we want to spend with our families and loved ones, so the lyrics which were put together out of letters between the military wives and their partners were very touching. Many people campaigned for this to be the Christmas number one, and it beat X Factor winners Little Mix to the top spot.

2012: He Ain’t Heavy, He’s My Brother, The Justice Collective

This charity cover of The Hollies’ song reached number one after being released December 17, 2012. The Justice Collective’s aim was to create awareness of and support for the Hillsborough Disaster, which the song’s profits contributed to. Many British musicians contributed to the recording, including Mel C, Robbie Williams, Rebecca Ferguson and Paloma Faith.

Skyscraper was the penultimate X Factor number one to grace the top spot, and it managed to keep its place over the new year as well. Sam Bailey, the reality show winner, covered Demi Lovato’s original song Skyscraper. Sam Bailey worked at a prison before entering the X Factor, but since then she has released a number one album and performed in many touring musical productions.

Ben Haenow won the eleventh series of the X Factor, after which he released his cover of OneRepublic’s Something I Need. He has since released two albums, including a song with Kelly Clarkson and a charity single named If You’re Lonely, proceeds of which were donated to the mental health charity Mind.

2015: A Bridge Over You, The Lewisham & Greenwich NHS Choir

Another choir brought together by Gareth Malone, the Lewisham and Greenwich NHS Choir reached number one at Christmas in 2015. Their song was a mixture of Bridge Over Troubled Water by Simon and Garfunkel and Fix You by Coldplay – two emotional songs that were guaranteed to capture hearts!

This song absolutely flew up the charts and spent nine weeks in total in the top spot, including over Christmas. Featuring English singer Anne-Marie and Jamaican singer Sean Paul, it was a much more upbeat song than we had seen in the Christmas charts for some time.

Ed Sheeran was one of the most popular artists of the 2010s, and this song was no exception. Not content with grabbing the UK’s Christmas top spot, he also reached number one in sixteen other countries. Following this release, Ed Sheeran recorded two other versions of the song. Perfect Duet, featuring Beyonce, and Perfect Symphony with Andrea Bocelli.

Each year there are countless campaigns to get the nation’s favourite songs to number one in time for Christmas. Some of them are heartfelt and inspire communities, and others give us all a big bite of joy. The last three years have done both, with LadBaby dominating the Christmas charts. However, they aren’t just producing hilarious songs; they are also donating their profits to The Trussell Trust. We Built This City (On Sausage Rolls) was the first of their pastry-themed number ones.

LadBaby’s 2019 number one single was even more direct this time, with their parody of I Love Rock ‘n’ Roll celebrating the country’s favourite snack once again. The couple beat Stormzy, Lewis Capaldi, and Dua Lipa to the top spot.

Last year, we were graced with another sausage-roll themed parody from LadBaby, which covered Journey’s Don’t Stop Believin’. The Trussell Trust, the charity that all of their songs’ proceeds went to, work to provide food for those in poverty in the UK, stocking over 1200 foodbanks in the country.

The question remains, who will be Christmas number one in 2021? With Adele’s recent release becoming the highest selling album of the year within days, and Ed Sheeran and Elton John releasing a Christmas song together, we could have some well-loved winners at the top. However, Craig Revel Horwood of Strictly Come Dancing has stated he is releasing a Christmas single, and we are yet to find out whether LadBaby will be gracing us with another sausage roll single, so it’s all to play for.

All we know that we love a Christmas number one campaign, and even more so if it’s for a good cause.